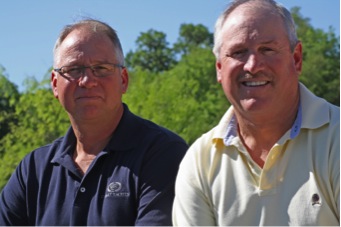 Jay and Clifton Chowning are native Austinites, who grew up on the upper shores of Lake Austin near Quinlan Park. Their parents, Lela and Henry, moved to the area in the early 1960s. They could not have known how this decision would ultimately result in forming the very fabric of their sons’ characters and in cultivating their life-long relationships for years to come. With Steiner Ranch acting as their backyard, the brothers spent their summers loading hay, riding horses, and learning the lay of the land.

Jay chose to stay close to home and work for his father. Henry’s business, Triple C Homes, was instrumental in the development of the River Ridge and Lakeland Park subdivisions, where he constructed many homes and boat docks. The structures were built with brick and mortar but were not at all traditional. Their styles were distinctive, from the more conventional A-frames to B-frames and the more interesting round and barn-shaped homes. They were involved in many projects on and around Lake Austin, including building the boat docks for the River Bend trailer park, the first phase of the Austin Country Club, the strip center on Foster Lane near Northcross Mall, an eye clinic at Steck and Shoal Creek, and boat slips at The Courtyard at Bull Creek.

Sadly, Jay and Clif lost their dad in 1996. Jay carried on the construction business with such projects as converting a McCoy’s Lumber into Driscoll Motors, building boat slips for what is now known as Steiner Ranch Lake Club and several houses and storage facilities in River Ridge and Lakeland Park.

After graduating, Clifton also followed in the home building industry, in a different capacity. He started his career selling modular homes; first in Austin, then in North Carolina next Kansas and finally, New Mexico. He at last returned to his roots to partner with Jay in the boat storage business. They acquired property at Terjo and River Bend, which included some residential rental structures. They also acquired the property that held the well that once provided water for the 150 houses in our neighborhood.

It was about this time that Lake Austin was being overrun by hydrilla, which lead to the formation of the lake management company, Moss Monster. The brothers have since expanded the company from a small harvesting company to a multi-faceted business, which includes building boat lifts, boat docks, dredging, excavation, flood debris cleanup, removal and replacement of pile driving.

Over the years, the brothers have acquired over a half million dollars in heavy equipment which has been instrumental in expanding their opportunities in bidding on construction jobs

Their love of Lake Austin and unique approach to problem solving is what has made the Chowning brothers well known in the community as the go-to guys for rectifying one-off situations. They hold a vast knowledge of the neighborhood infrastructure.

CHECK OUT OUR NEW SERVICES HERE:

Boat Lifts There are a number of reasons why it is a good idea to invest in a boat lift. Not only do they give you quick and convenient access to your boat, but they also allow for easier inspection, cleaning, and maintenance. When your boat is on a lift, it cuts down on some […]

DREDGING   We have extensive, practical and hands-on experience in the areas of permitting, planning, dewatering and disposal in residential, industrial or government areas. Moss Monster can help you successfully plan and execute your next hydraulic dredging project from conception through completion. Give us a call or fill out our Estimate Form. From dredging beneath […]

Boat Docks   If you are thinking of building a boat dock, than look to Moss Monster. Our experienced and knowledgeable staff can custom build your boat dock to meet your specific needs. Whether you are interested in something simple or a more innovative design, no job is too small or too big for us […]